A Plea To End The Black Barbie Doll Look

cinagrOrganic » A Plea To End The Black Barbie Doll Look

Every time I see my beautiful black queens with long, straight hair weave I take a sigh. Their beauty is undeniable. Let’s get that out of the way, first. But it’s not the hair. It’s the skin tone. Dark skin is majestic, regal and refined. There’s a presence to it. But it gets covered up with excessive hair. Sometimes I want to scream, “Give White people, Asians, and Indians back their hair- We Don’t Need It!”

And don’t get me wrong, it looks fine on them. But our hair looks better on us. We’re better at our blackest. Is there anyone more beautiful than Cicely Tyson, Grace Jones, or Lupita? Hair like wool, isn’t that how they describe Jesus in the Bible? The fact that this is how we look naturally with no alterations is a blessing. We don’t have to do much. Just be ourselves.

I know, easier said than done. Here I am making a plea for dark skinned sisters to let go of the long hair weaves when I haven’t walked a day in a dark skinned woman’s shoes. For many, being dark skinned is a crime from here all the way to Africa. The fact that even there a black woman resorts to bleaching cream as an option to a better life is beyond disheartening. So if not at the source, where is a dark skinned woman celebrated? At least with long, straight hair she can make an attempt at the “mainstream” as if the black could be softened or even camouflaged. And it’s being done at the highest level. Dark skinned women emulating this Barbie look on instgram have thousands, sometimes millions of following. So obviously there is a place for it, and getting the look means Hair. Must. Be. Laid.

But still. We don’t have to play white people’s game. Leave them the hair, let them fight over the weaves, and let’s go blacker. Let’s go where they can’t go though they try.

No coincidence that Bo Derek’s most iconic look was when she was emulating us. And then there’s the Kardashian/Jenners making millions emulating us. And the funny thing is they think we don’t know. I respect German Martina Adams more than any of them because at least she’s honest. She’s telling everyone she wants to be black while the rest just deny and steal.

But the cool part about it is the more we know that we lead with our blackness, the stronger we become, and they- white people- have to follow us (which they already are). Because we are no longer following them. Once we take away this straight hair and white skin as validation of beauty, what do they have? When was the last time you followed white women for beauty trends?

We got IT. But it starts by owning it and celebrating our own from the blackest among us for her dark skin and afro hair. I have two young daughters with short, afro hair who need to see more women like this. They also need to see more kids who look like them. Right now, a young, black girl rocking short natural hair is rare- unless in Africa. It’s much more common to see our young girls in long braids. This past summer, I saw a 4-year-old with a full hair weave and edges that were as smooth as a baby’s bottom- gone like a Brazilian wax. We need to let these girls rock their hair short if it’s short. So what if people think ‘she’s’ a ‘he.’ It happens to my girls all the time. We laugh about it now. But they also get A LOT of compliments from all types of people every day who are happy to see them with their natural hair. We cut Princess Tiana’s hair and the hair on most of the dolls they get because even rarer is the black doll that doesn’t sell the fantasy of long hair. Yes, the dolls are black, but the majority still look like Barbie. So this black barbie image starts early and has been around for a long time. 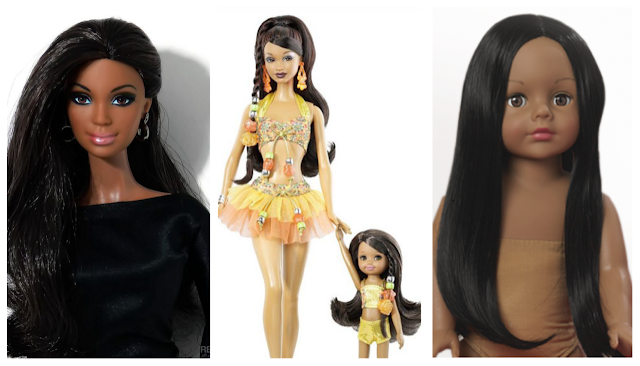 But it can end. We can make a safe space for black girls to be themselves, no additives, from their beautiful afro hair to their flawless dark skin. We can show them images of beautiful black queens who reinforce this beauty type until they know that their beauty is real and relevant, and that they lead the beauty conversation. Think about it, we’re just now realizing that we as black people, as black women, lead popular culture. Now imagine if we had realized that as kids. That’s the power we have in this next generation. That’s the power as adults that we have now. So what are we going to do with it?

Do you believe in perpetuating the Black Barbie Doll Look? Erickka Sy Savané is managing editor of CurlyNikki.com, a wife, mom, and freelance writer based in Jersey, City, NJ. Her work has appeared in Essence.com, Ebony.com, Madamenoire.com, xoNecole.com, and more. When she’s not writing…wait, she’s always writing! Follow her on Twitter, Instagram or